Various obligations led me to the unusual circumstance of staying home this weekend. So, with nothing particularly exciting to report, there are fond recollections of a couple of recent trips. Squeezed into my frigid Yankee Holiday was a quick visit with one of my oldest friends. 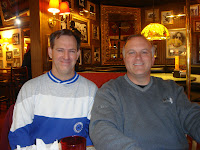 We met when we were fry-cooks together at McDonald's in the 1970's, and our friendship has endured despite time and distance. He lives in a DC suburb and we were able to squeeze in a quick burger lunch before my flight home. Longstanding friendships are interesting that way. You may go years without seeing one another, but when you do get together,things feel very comfortable. Our visit was too brief, but it was great to see him and the burger was tasty.
Later in the month, I found myself in Orlando, America's playground. While I did not set foot in a theme park, there was plenty of football-related fun. Me being me, though, food stories leap to mind.
Being from the country and all, I had never eaten at a Cuban restaurant, so when I saw one, I convinced the traveling companion to give it a try. 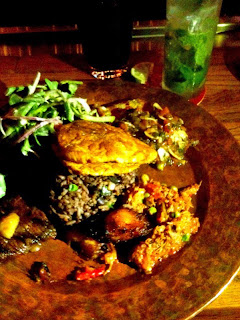 We were not disappointed. I ordered a sampler dish that had three kinds of meats and several sides. There was rice involved, some kind of black beans and plantains! Plantains? I've seen them in the grocery store, but I don't recall ever eating any. I can't say that anymore. The dinner, accompanied by Mojitos, was outstanding.
The trip to central Florida was all about football, so certain details were overlooked when we were packing. For example, we made no provisions for New Year's Eve. After a long day of following around the LSU football team and providing coverage of their activities for TV viewers back in Louisiana, we were tired and hungry. Given the day, we had trouble finding anyone willing to accommodate us. The hotel restaurants were booked solid. We found our way to a great development called Pointe Orlando and wandered around looking for food. Time and again, we heard "Sorry, we're closed for a private party," or "all seatings are full." And the unspoken but obvious "You guys are way underdressed for tonight, boys."
Finally, a Maitre D' took pity on us and directed us to patio seating by the outdoor bar. It was fantastic. They had a bowl game on a big screen HD television, the bar was nearby and the waiter was attentive. And the food: outrageously good. Expensive, but worth every penny.
On the way home, I was asked what the high point of trip had been. I said, quite honestly, 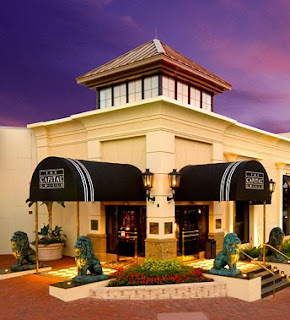 "For me, it was the first bite of that steak at the Capital Grille." Twice in 2009, I had the opportunity while traveling to eat at one of those places and both times the experience was through the roof. I may even choose my next trip by making sure they have a Capital Grille there. Next time, though, I have to make sure I take my wife along. It's just not the same without her.