(Natchitoches, LA) – Do you remember the movie “Broadcast News” (1987)? One of the most memorable scenes in it involves a character played by Albert Brooks.

A credible, hard-working broadcast journalist, Brooks’ character gets an opportunity to anchor at the network level. While doing so, he breaks out in a nervous sweat.
I thought about that today as I hosted the “Toyota Intermission Report” between games of a men’s and women’s basketball double header on the Southland Conference Television Network. About five minutes into the show, I was sweating vigorously, if not profusely. 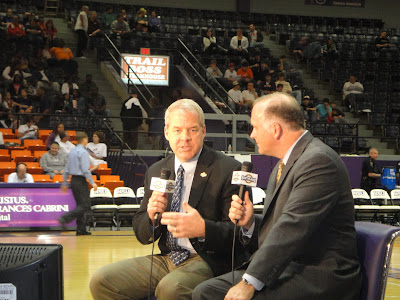 It had little to do with nerves but rather was a function of the furious pace of setting up the show immediately following the first game and the proximity of the lights. 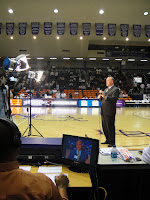 Plus, it was warm in the arena and I was wearing a wool suit. I could have chosen something more light-weight like a blazer and slacks, but it’s January!
I had a half-hour to fill without script, but with plenty of scores, standings and interviews. It was the kind of television I really love: live, extemporaneous and on location. 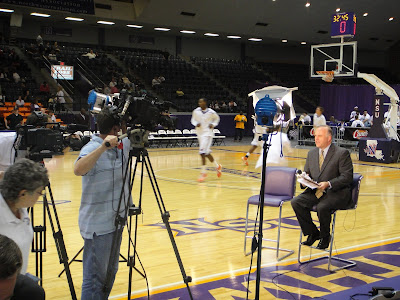 It’s been almost five years since I anchored from a studio with a TelePrompTer. I believe if the opportunity to do so should arise, it would be like falling off a log. I made one mistake today, tossing to a break before I was supposed to. That’s an issue and I know I tackled the production guys for a loss, but I hope we all recovered well.
Even though I don’t do this sort of thing for a living anymore, I still like to think I have enough intellectual dexterity to pull it off without embarrassing myself or the network. Deep experience certainly helps. I see young broadcasters who have such a dependency on their prompters, some of them really struggle when they’re asked to be live from a remote location.
On a personal level, I really enjoyed going to Northwestern State and doing this assignment. Many of the people there have been a part of my life for decades and it was a pleasure to see them again. 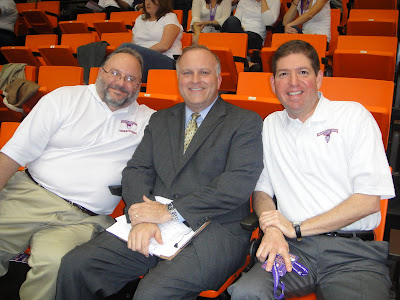 It was comfortable to spend time with coaches and broadcasters I’ve known for so long. My wife went along and observed from a distance. She later said, “It really looked like they were happy to see you.” I hope she’s right. 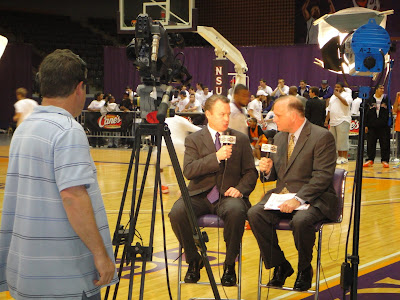 I look forward to doing it again, assuming I’m asked. I feel fully confident that I’m up to the task. Really, no sweat!
-------------------------------------------------------
Here's a peek behind the curtain: You get two guys who are not as young as they used to be. Shine television lights in their eyes. While they are live on the air, tell the host through the gizmo in his ear to refer to something on the monitor. Then watch with hilarity as the two old guys try in vain to actually read the information. Their faces might look something like this: 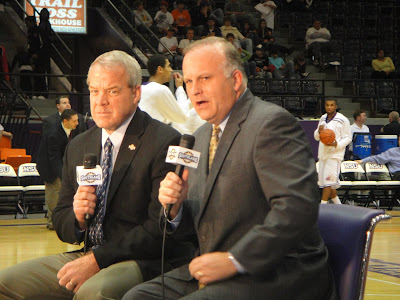 I hate it when that (profuse perspiration) happens. I sometimes suffer from hyperhydrosis ( actual term ) when busting out a set-up and then having to appear all cool, calm & collective.