Feeling Silver and Blue in Jonestown 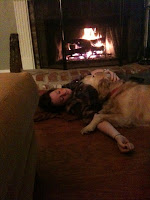 On the way from Orlando to Arlington, I spent the night in my own bed and reacquainted myself with my lovely bride, who has been dutifully keeping the home fires burning. She had our daughter and the pets to keep her company, but somehow I get the feeling that didn’t help her much.
This is my first trip to Cowboys Stadium, and it certainly lives up to its billing. 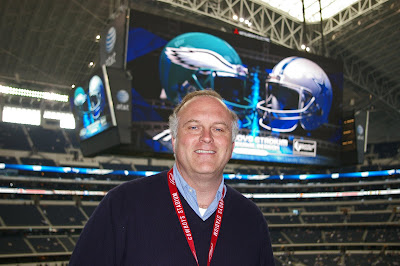 Like so many people have said, it’s difficult to force yourself to watch the game as it’s played on the field because of the spectacular giant high definition screen commanding your attention.

I made the trip with my friend Roy, who is my Cowboys connection.

I’m grateful for the opportunity, as I am for my friend Tim, who lets me tag along to LSU games. It just turns out to be a kind of cruel coincidence that they invited me to games quite literally a half-continent apart. It says something about the nature of friendship and the intensity of football fandom that I was eager to avail myself of these opportunities.
It’s easy to be struck by the obvious contrast between the facilities I have visited in the last three days. Citrus Bowl Stadium, built in 1936, has been well maintained, with the unfortunate exception of the playing surface. Still, it is more than 70 years old and in places it shows. This place cost more than a billion dollars to build and is still brand spanking new.

For me, there is great emotional symmetry to being here. This game against the Philadelphia Eagles is the last regular season home game in the first season at the new stadium. I had an opportunity to say good-bye to the old facility a year ago, and I made it here just under the wire. There are people who have already experienced eight or nine games in this facility and they have grown accustomed to its modern wonders. Not me. I’m thrilled to be here.
The trip home should take about three and a half hours, which will seem like nothing more than a commute after the trip from Central Florida. I just hope I can stay awake long enough to make it.