(Orlando)- The new year got off to a sloppy start for the LSU football team and its fans. Organizers of the Capitol One Bowl put a great face on the stadium and the field. 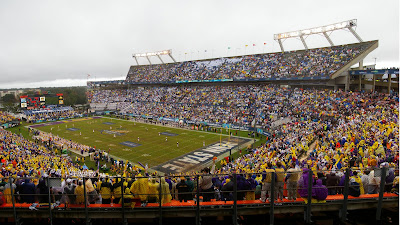 It was all for show. Thanks to overnight rains and a torrential thunderstorm that soaked central Florida until about a half-hour before kickoff, the playing surface was basically a bog. 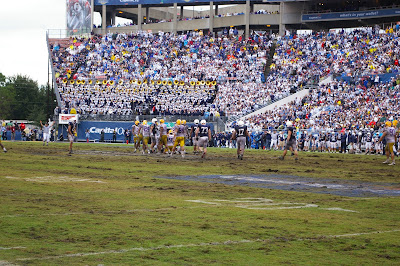 LSU lost to Penn State, 19-17. Remarkably, the Tigers have not won an outdoor post-season game since the 1997 Independence Bowl. They've won two national championships since then, but both games were played in the Louisiana Superdome. They also have a Sugar Bowl win over Illinois during that period, in the same venue.
The field conditions were so bad, more than one LSU player described the surface as "the worst field I've ever played on." The Tigers were clearly victims, robbed of the ability to use their superior speed, particularly going sideline to sideline.
In the big scheme of things, the outcome of the game and the factors that led to it are not that significant. There was no championship hanging in the balance. It was simply an interesting, competitive intersectional match-up.
I still enjoy watching a good football game, and this was will go down as one of my favorites. 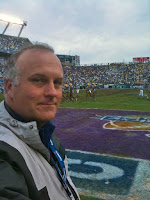 The conditions will be discussed for years to come, no doubt becoming part of LSU football lore. Joe Paterno was roaming the sidelines and I got to see him in person. I even got to ask him a question. It wasn't a particularly clever question, but I made eye contact with him and he responded. Just like the final score, the quality of the query will become insignificant in the quagmire of the day. I'm just glad I was here.