Rolling Around in Circles 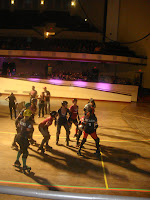 We found ourselves at an eerie cultural crossroads as we were somehow compelled to attend a (seriously) roller derby event on a November Saturday night.
Throughout the day, in anticipation of this event, I refused to tell my wife where we were going or what we would be doing. I said to her, “We have something to do tonight, and you just need to go. Don’t even try to guess it because you never will.” Even after we entered the venue, she was still in the dark. We picked up our tickets in the foyer and only after she glanced at hers did she grasp what was going on. She said, “I’ll be needing a beer or possibly something more convincing.” 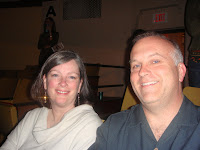 True to form, though, she was a good sport about it, gamely carrying her Silver Bullet to her seat and settling in for a pre-event primer from the effusive public address announcer.
When I was a kid, I would watch roller derby on TV and I certainly remember the 1972 film starring Raquel Welch entitled “Kansas City Bomber,” about the struggles of a roller derby star. Trust me on this, none of the combatants we saw resembled the lovely Raquel; neither was the competition similar to that portrayed in the film. 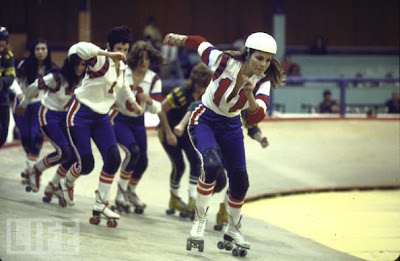 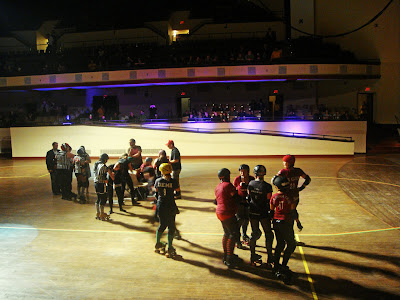 Although the objectives of the sport were carefully explained to us, we had a difficult time discerning the system of scoring. Most of the discussion in our section of seats seemed to revolve around whether or not this one particular young woman in skates was wearing underwear. A studious examination of her sartorial splendor, albeit from a distance, led to the conclusion that panties were present but flesh colored. That being settled, we made a good faith attempt to find humor in the moment.
The highlight seemed to be a not-so-spirited halftime exhibition featuring the mascots from local minor pro sports franchises and a couple of area business. 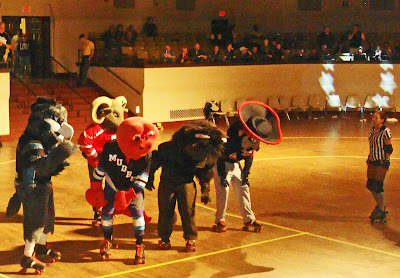 It was rigged from the start. I mean, how could the giant crawfish representing the hockey team not win? He skates for a living! 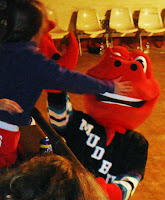 He did pratfalls, spins and skated backwards and still won handily. The mustachioed pirate representing the baseball team seemed to have his sea legs, apparently having spent precious little time on skates of any kind.
This event evidently was designed to take the temperature of the area regarding the possibility of placing a franchise here. With an announced paid crowd of 250, it’s hard to determine how bright the future is for women’s flat track roller derby in for North Louisiana. It wasn’t as fast, violent or pretty as anticipated. If there’s a next time, maybe there should be more of a discussion about the underwear situation.