A Beautiful Evening on the Bayou 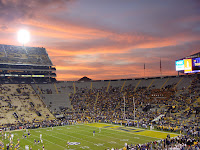 (Baton Rouge)- The weather was spectacular for LSU's homecoming game against Louisiana Tech. From the Tigers' perspective, that's about the most positive spin on the whole evening. A week after LSU's enthusiasm-sapping loss to Alabama, Death Valley seemed appropriately named for the wrong reasons. There was just no life in the crowd or the team. In fact, Louisiana Tech had a halftime lead. Many media reports tell us it was the first time a Bulldogs squad had a lead over one from LSU since 1904...105 years!

We made the trip at the behest of Happy Couple II. 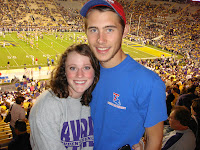 He is a Tech student who enthusiastically supported his team, wearing Bulldogs gear and unabashedly doing Tech-related cheers while embedded among Tiger faithful. Nobody gave him a hard time, which tells you something about the mindset of LSU fans at this juncture of the season.
Our daughter thought long and hard about what to wear. She didn't want to show up in Tech colors, but didn't want to fly in the face of her companion by wearing LSU gear. So, she settled on neutral grey. 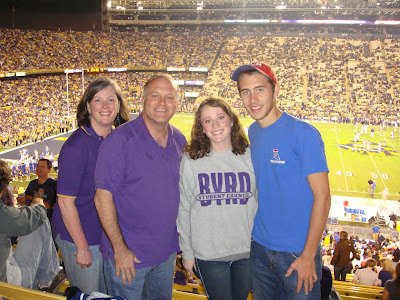 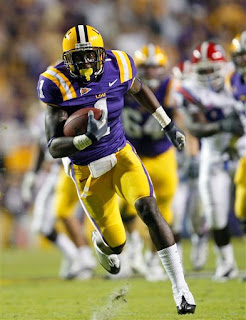 That seemed appropriate, given the mood in and around Tiger Stadium. Ultimately, LSU won the game. The smattering of Tech fans who found their way into the stadium seemed to walk away reasonably happy despite their team's loss.
It just didn't seem like an LSU game at all. The game had no real meaning and the outcome ultimately was irrelevant. The kids had a good time and got to spend a lot of time together, so that's a good thing. 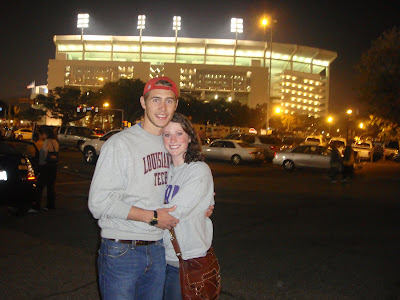 When it was all said and done, our daughter, non-committal and in neutral colors, was the most appropriately dressed person in Baton Rouge.