Baby, It's Cold Inside

In the mid-1990's, the idea that minor league hockey could attract crowds in north Louisiana must have seemed presposterous. Now, as we apprach 2010, the local hockey club is in its thirteenth season and is simply part of the community. It is fair and accurate to say that the beautiful arena on the banks of the Red River simply would not exist if minor pro hockey had not come to town. The availability of a primary tenant was the catalyst for the construction of the building, which has been a tremendous community asset. 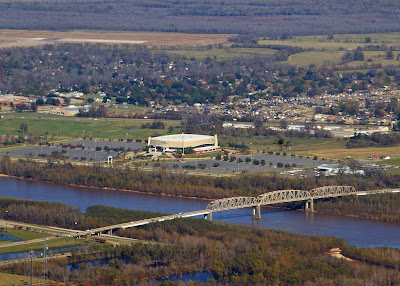 As a local sports journalist, I closely followed the arrival of the team and its early days in the less-than-appealing fairgrounds venue, Hirsch Coliseum.

When the team's original owner started making noise about building his own hockey facility, local goverments noticed. Bossier City's leaders brandished their checkbook and something spectacular happened.
I have spent many an afternoon and evening in the facility, so much so that I am flabbergasted when I hear people say they have never been inside. Those are people who just don't get out much, I guess. Concerts, Arena Football, big-time bass fishing, religious revivals, graduations, cheerleading competitions and yes hockey attract tens of tousands of visitors to the place every year. Did I mention rodeos and wrestling matches? How about basketball or mixed martial arts? I have seen all of these things inside that place. How can you not have found at least one thing to compel you to visit?
One of the most memorable experiences of my broadcasting career happened right there. Legendary rock band ZZ Top played the arena.

I was fortunate to be assigned to interview them live on the news the night before their show. They invited me to stay for rehearsal. I sat in the arena with about a half-dozen other people and essentially enjoyed a mini private concert. To borrow a rock and roll phrase: Dude, it was awesome!

I've been all over the building: the press box, the video room, the green room, the luxury boxes, you name it. As a broadcaster, a ticket holder, even as a volunteer when the facility has been used as an emergecy shelter during hurricane evacuations, I have strolled the concourses as well as the catacombs.
But until Satuday night, I had never stood at center ice.
The honor of dropping the puck before a hockey game was bestowed upon me. 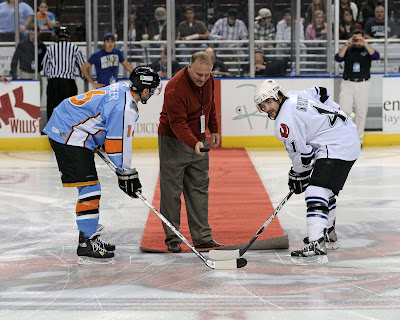 It's the hockey equivalent of baseball's first pitch. 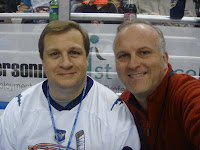 They even rolled out a red carpet. For a moment, I was some kind of dignitary. I also got to sit in the penalty box with the team's owner.
There's a lot less pressure involved in a puck drop that a first pitch. 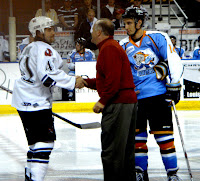 You don't have to throw anything sixty feet, you just need to stand there and drop the puck. Pretty simple stuff. The trick is not to slip on the ice. I guess that's what the carpet's all about.