We Showed Up in the Same Place, At Least

(Ft. Worth, TX) – We showed up in Ft. Worth with an SMU alum and I guess she brought her team some luck. With my sweet mother-in-law in the stands, appropriately attired to be true to her school, the upstart Mustangs survived a furious second-half rally by the Horned Frogs to win the game in overtime. 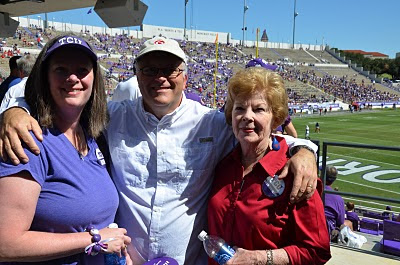 It’s been an unusual sort of homecoming for mother-in-law as she celebrates her birthday weekend with one of her daughters and one of her granddaughters. Not only did she step completely out of character by actually attending a college football game, but she went on a brief pilgrimage to her late husband’s boyhood home. My wife saw houses where her father and grandparents lived in Ft. Worth, so the family weekend theme certainly was extended.

I stayed in the stands for a while and actually caught a glimpse of my daughter the TCU student. 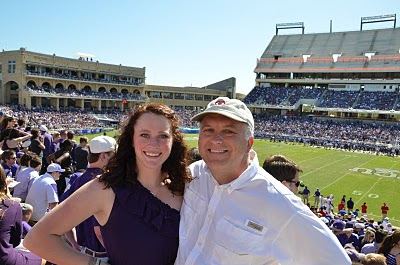 But my natural environment is the sidelines, so I worked part of the game with an old Shreveport media buddy, who now works in Dallas. He had his game face on. 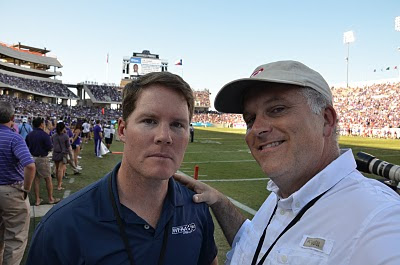 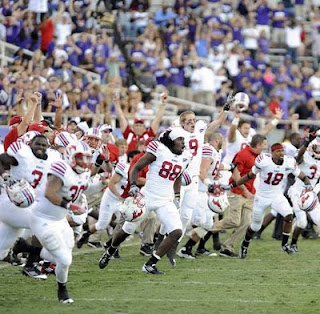 It was fun for me. I had to enter the zone of neutrality once I draped the media pass around my neck, and I actually enjoyed conducting post-game interviews with ebullient SMU players and their head coach. Beating nationally-ranked TCU, a traditional rival, was a milestone moment for the program.

It’s a strange weekend, in a way. I’m traveling separately from my wife and her mother; but obviously our agendas intersect significantly. There are parallel agendas in play: it’s a football weekend for me. I’m going to the Cowboys game, too. For the ladies, it’s a weekend away so they can celebrate a birthday.

And of course it was terrific to see our daughter, who as far as we know has no plans to come back to the family home before the holidays. So, I guess I need to plan another football weekend so I’ll have an excuse to see her. Maybe I’ll let one of the ladies tag along.

P.S.: For the first time in a year or so, I actually snagged a photo with a new mascot! 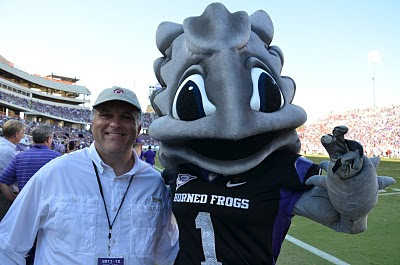