She was the best dog I've ever had. Claire said "Belle was perfect." I want to concentrate on the nine years of love, happiness, amusement and companionship she gave our family, and maybe soon I will; but now there's a cavern carved down the middle of my chest. We had to make the awful decision that confronts so many pet owners, and while we know we did the right thing, it just hurts. 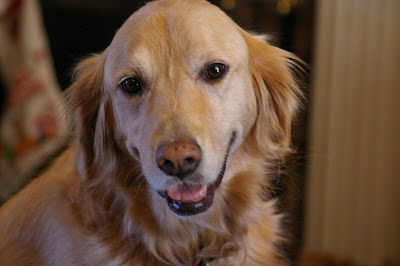 I'm 51 years old and Belle is the eighth dog I've lost. She's the first one about which I've had to make that terrible decision. She hadn't been feeling well for weeks. Heavy panting was the first sign, but we had no inkling it was this serious. As recently as Friday, we had hope that we could treat her and she would bounce back. Over the weekend, though, we had to force feed her baby food in a syringe. She would drink water, but wouldn't stand to do it. When I had to pick her up off the floor to get her to walk outside, I feared the worst. When she couldn't walk ten steps without stumbling, my fears were confirmed.
We took her to the doctor first thing and honestly I was still clinging to hope.I kept thinking "it's always darkest before the dawn." I wanted to hear the vet say "yeah, we'll give her some fluids, put an oxygen mask on her and see if we can get her back on her feet." Instead, he said, "I hate to put it this way, but she's in the process of dying. Her liver is shutting down, her breathing is labored. If she could talk to us, she would say she's in agony. I know what I would do if she were my dog." Claire and I just made eye contact and we knew he was right.
How unexpected was this? We had two full boxes of dog biscuits and a case of dog food in the cupboard. Her decline seemed sudden and it's been a little bit stunning. 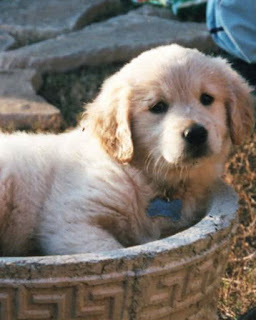 With the exception of our first year of marriage, I haven't been without a dog a day in my life. If you ask me now, I'm prepared to say I'm out of the dog business for a long time. Belle was just so terrific, I can't imagine dealing with another dog right now. The training, house breaking, all of the aspects of the responsibility: I just can't even think about it.
She was only nine years old. She was never, not once, a source of frustration, She was never destructive or loud. She was perfectly housebroken. She would fetch the paper every morning. She would actively play with the kids and us. She was everything you would want a dog to be, truly. The only criticism I can think of was the shedding. That's what brooms and vacuum cleaners are for.
Let's not forget about the Old formerly Fat Cat, who is fourteen years old and has lost her best friend. 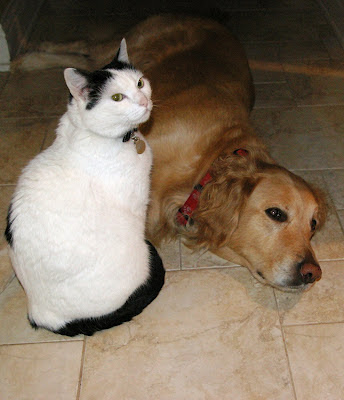 I'm sure she doesn't know it yet. Poor thing, this is the third dog she's lost along the way. The other two died right outside the French doors that lead to our patio. Oddly, the Sheltie passed away on the very day we brought home Puppy Belle. 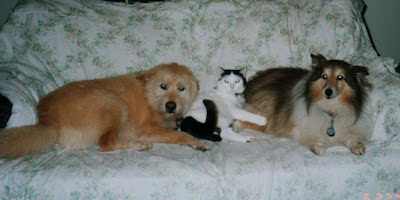 I know we will look back on Belle's too-short life with great fondness and affection, but right now the house is just too damn quiet. 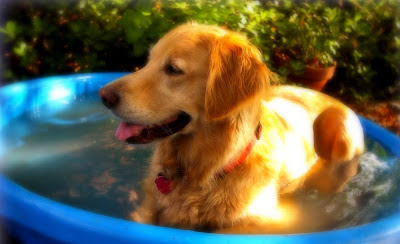 Hey Darrell, I know how much you loved Belle, and when my daughter Kim died, I lost my dog Barney, and I was so upset about it, that I went to mass every day, and couldn't stop crying, so after six months, i went and found another dog, Benjamin. No other do will ever take the place of Belle, but you'll find a dog that will love you just as much.We all hate to lose dogs,loved ones, but that's just life I suppose, we never totally get it figured out. I say,get another dog, it'll make you feel better.

So, so sorry, Darrell. Hugs to you & all your family. We can tell from your writings that Belle was a good girl. You'll see her again on the Rainbow Bridge one day. http://petloss.com/rainbowbridge.htm

I'm so sorry--I know all too well how you feel! It's just heartbreaking! I felt the same way about getting another dog. Was and still am so sure that I could never find another one like Toby, our standard poodle. It's been almost a year since we lost him and I still have trouble dealing with it. Time has eased the pain some--just need more time......

Dogs teach us so much about life. They show us love without condition...they bring us such happiness...and they always eventually break our hearts. God no doubt put dogs like Belle here to teach us, protect us,and to be our companions. I cannot imagine my world without a dog (or three) running around, making noise, barking at the UPS man, letting me know it is time for supper (mine and theirs!), or simply pushing their head under my hand for a pet on the head while I am working at the computer. Belle was a very lucky member of your family. She was loved, and no doubt returned the favor one thousand fold. I know your heart is heavy with her loss. I hope you can find comfort in keeping the memories of the happiness she brought to you and your family and the happiness you and your family brought to her life as well. Take care.