We are worried to the point of distraction about the health of our 9-year-old golden retriever, The Best Dog Ever. Our caring veterinarian lists her condition as "guarded," and for the moment things don't seem to be getting better. I fear the worst outcome, and it's just too soon to lose her. She obviously feels terrible, but the most ominous circumstance facing us is she is now refusing to eat. She won't eat anything: her favorite treats, ice cream, eggs, nothing. It's as if she's just given up. For now, we'll fight the fight for her as best we can. 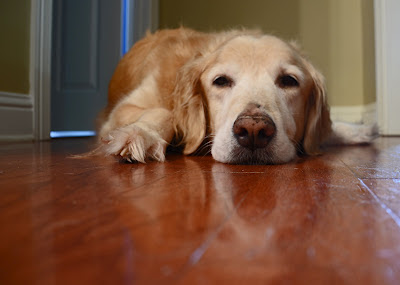 For a couple of weeks, she hasn't been herself: no energy, slow to stand, heavy panting. At first, the working theory was some kind of inflammatory issue, maybe arthritis. Medicine for that seemed to give her a little more zip, but then after a couple of days her lethargy returned and she started coughing. The vet then ordered chest X-Rays, which revealed some scary-looking lesions in her lungs. The worst fear was cancer, but on the films the spots didn't look like tumors. It was a head-scratcher for our dog's two excellent doctors, so they uploaded the images to a veterinary radiologist in Dallas, who diagnosed the problem as lung flukes. The younger of our two local vets said she had seen this in text books but had not encountered them in her practice. 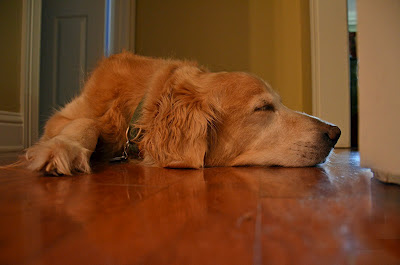 This means there are parasites inside those pulmonary cysts, which animals and people can get by eating crawfish or snails.There's a treatment for it, but unless and until those cysts go away and the parasites die, she remains at risk for death. If one of those things ruptures, a pneumothorax (collapsed lung) will result and that's the end of the road. So, we're keeping her inside and keeping her as still as possible.
The other challenge is the administration of the medicine. It's a powder, which means it has to be taken orally. But she won't eat. It's a problem. The only thing we can really do is parent her and try to find ways to get the powder into her stomach without getting it into her lungs.
Everybody's worried. Even the matriarch of the menagerie, the Old formerly Fat Cat, knows something's wrong and is staying close by. We don't know what her message to her canine friend might be, but hopefully it's "You have to eat." 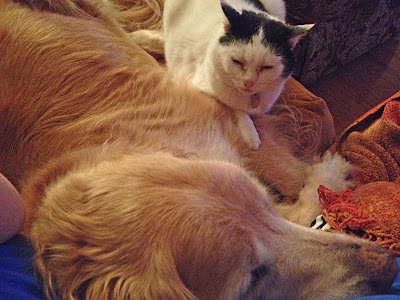 We're just so sad and we want her to pull through. She and the cat are vestiges of our kids' youth, and of course they're straight-up members of the family. There's been fear, frustration and a significant number of tears shed over the last few days. Plus, and I know it's indelicate to discuss it, you have to consider how much money to spend here. The vet bills are piling up.
My wife will tell you that I've been saying for years "You love that dog too much." I've been kidding, mostly; but now it's ringing true. We want to give her every chance to live a few more years. We love her that much. 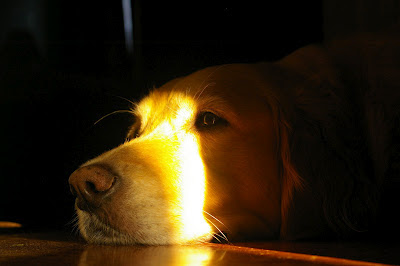 Aww, I am sorry to hear this, Darrell. Pets are part of the family for sure. I will be so scared when Sandy Lab slows down. She's 10 now, so I know it is something I'll have to face someday. Sending lots of hugs & healing from our house to yours.