(Arlington, TX) – At its core, this is a football game; but it’s also a cultural event. LSU’s season opener in Dallas-Ft. Worth is kind of “north Louisiana’s game,” because the drive is so easy for people who live along the I-20 Corridor. Conversely, a lot of the I-10 people chose not to make the drive because “it’s not Tiger Stadium.”
So, it’s a big event for the home area, and that has attracted a lot of local media who usually don’t work in and around sports. A high-profile local reporter, a long-time friend, wound up with a media pass. He's been doing feature stories about local fans in the days leading up to the game. It would be inaccurate and unfair to say he is an impartial observer, especially since he has a close personal relationship with an LSU player. He stuck around for a little while. 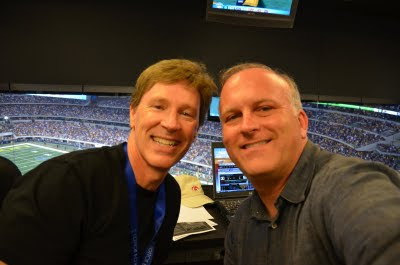 But he just couldn’t stand the constraints placed on him. (No cheering, no jeering, no loud proclamations of any kind). He had to leave. He actually preferred walking around the stadium without an assigned seat. He’s a football nomad, burning off energy and presumably cheering as loudly as he wants.
Decorum does not keep you from hanging out with your friends during halftime. 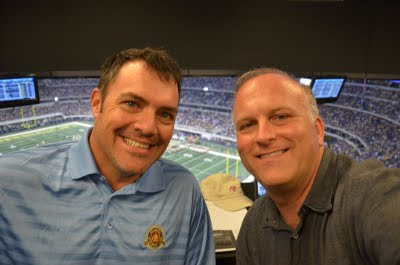 It’s been a close game through two quarters. Let’s hope all these old media pros can contain themselves.