See the Tree, How Big It's Grown 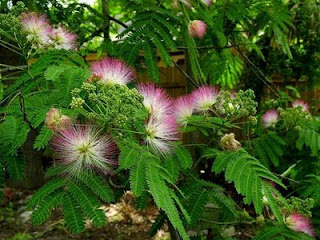 When I was a little boy, there was a huge mimosa tree in our front yard.
When I was four or five, my mother started having what the doctor decided were allergy issues and a decision was made to saw down that tree. For some reason, it upset me so much that I still remember it vividly. So, I’ve always wanted a mimosa tree.
The landscaping people arrogantly refuse to plant one. I’ve been told more than once “It’s a trash tree.” Maybe so, but it’s my yard and if I want to pay tribute to my roots with a trash tree, so be it. 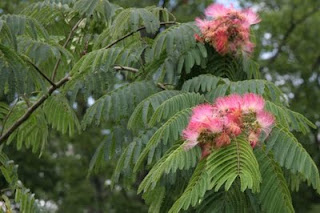 Twice over the years, we’ve planted mimosa saplings in a strategic spot in our yard. The first one was a gift from my late father-in-law, who knew of my mimosa quest. Sadly, both of them died. I think they were done in by the string trimmer the yard man uses, but that’s just a theory.
This has mystified me, because these trees grow like weeds (which, if you believe the landscape people, they are) all over town.
Unbeknownst to us, our next door neighbor the doctor has been watching our mimosa struggles. He met me at the mailbox one day over the winter and said he had been growing a small mimosa tree in a pot on his porch and that he would plant it for us whenever we were ready. He evened named the tree “Seymour” after the fast-growing, man-eating plant in “Little Shop of Horrors.” 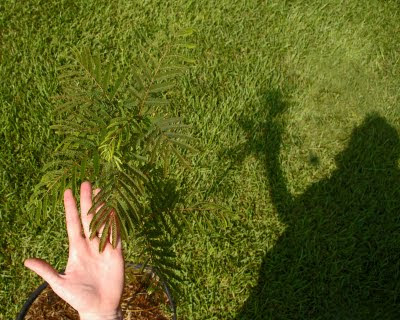 Here we are, in the August blast furnace, and Seymour seems to be thriving. He’s defoliated a couple of times, but has bounced back strong. Now, it looks like he might make it. I think I know why.
My wife has taken to talking to him on an almost daily basis. She praises him for standing up straight (He does have a history of bending his young trunk). 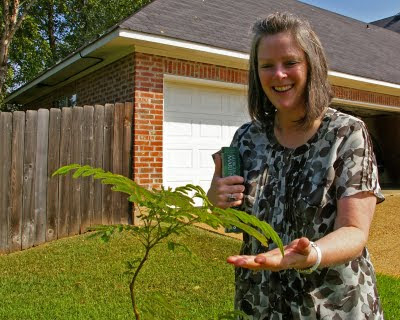 She oohs and ahs over his new leaves and she tells him what a big, strong, shady tree he will be one day. It seems to be working. The third try is the charm, it appears. Seymour is getting a lot of attention.
We will keep watering, keep encouraging, keep watching him grow and keep hoping nobody develops any nasty allergies.

When we grow something by our own and it grows larger we feel so good since we know that it is due to our hard work.So i can understand how you are feeling

Really its grown so big.Mimosa trees require a good bit of sun. They will not grow in a wooded situation.I just planted a chocolate memose tree 2 month ago but hasn't grow at all dropped some leaves and sprouted a few flowers but something just isn't right is it to much or to little water, watered it almost daily for the first weeks as per the advice of nursery but it looks slightly paler than when first bought, also just had lots of rain from a storm, what wrong.