Back From Exile in Westeros

Most of my family has spent the summer on the mythical continent of Westeros. I can’t say I thoroughly enjoyed my time there, but it’s been an adventure. Among those of us on the journey, I’m the first to return to normal life. My wife and son are taking a later boat back to the mainland.
If you have no idea what I’m talking about, you’ve missed the geek pop culture phenomenon of the year, A Song of Ice and Fire. (More popularly known as A Game of Thrones).

For us, it started with a mini-series on HBO. My 21-year-old son and some of his buddies started watching it and got hooked. This led them to the book upon which the series was built, which was the first of five books currently in publication, with two more planned. 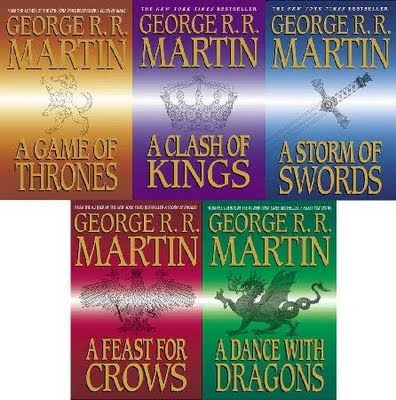 Each volume checks in at 1000 pages, give or take a few. So, you can see how dedicating ourselves to reading them all has dominated the past few weeks.

A Game of Thrones is the title of the first book. A Song of Ice and Fire is the name of the series. If you’re not into it, it means nothing to you. If you start reading, chances are you’ll find yourself looking for reasons to park yourself on the sofa and read for a couple of hours a night. 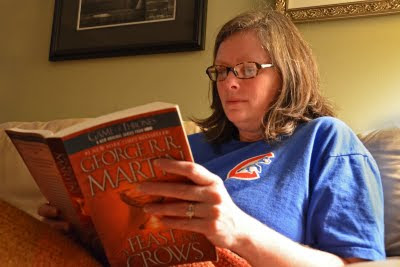 I find myself surrounded by people who are somewhere in the middle of this literary saga, set in medieval times. There’s lots of violence, lust, love, war and travel. There’s plenty of anguish. There’s not much positive going on, but somehow it’s all riveting. And, yes, I have to admit there are dragons. I think it would have been better without them

This is the most concentrated time I’ve ever dedicated to one set of characters and ideas, and frankly I’m happy to come up for air. I’m glad I read them, though. The next book in the series is probably years away, so I’ll probably forget the details of all the cliffhangers before it hits the e-reader. But, whenever that happens I expect I’ll dutifully read the next thousand pages. 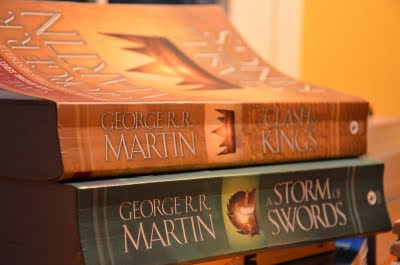 I’m grateful for my son, who berated us until we acquiesced and started reading. There are several people around me still in the middle of things and I’ve enjoyed discussing it with them. I’m also grateful to author George R.R. Martin, who got me through the hottest summer on record and led me right up to football season.

It’s time to stick my nose where it belongs: into sports periodicals.

Labels: "A Game of Thrones" "A Song of Ice and Fire" "George R.R. Martin" "westeros"