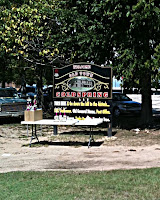 We had what appeared to be an elegant plan for our weekend trip to east Texas. What a happy coincidence that The Lifelong Best Friend’s lake house is just about twenty miles from the football stadium which was my ultimate destination. Great. We leave a little early, zip by the lake, drop off some stuff, head for the football game in time for me to make final preparations for my broadcasting assignment. Things were going smoothly until we got about a mile and a half from the house. That’s when our path, on a state highway, was blocked by a Conestoga wagon. 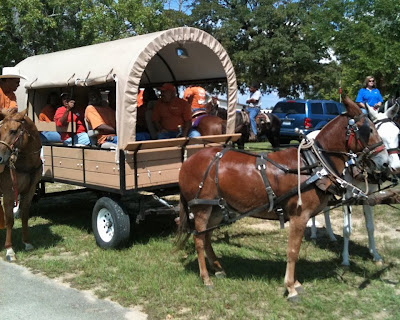 This, I did not plan for. A police officer in a modern squad car was directing people off the highway into a parking lot. I paused to ask him what was going on. He said, helpfully, “the parade.”
I asked, “What do I need to do?” He told me to pull over and park. I explained that I wasn’t there for the parade, and that I was passing through on the highway. He advised that I should just pull over and watch the parade, which happens “once a year.” He said he did not know a way around the parade and I just needed to pull over because there were people behind me. Has this guy ever heard of a detour?
We turned around and hoped to rely on our navigation system to find a route to the house. We went down gravel roads, dirt roads, and ran into dead ends. A circuitous half-hour later, we wound up right back at the parade! 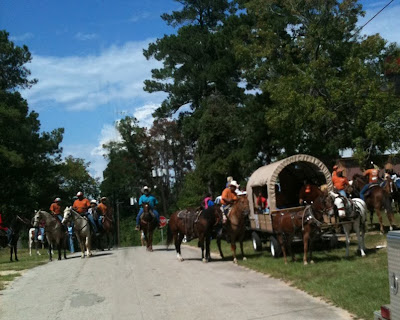 I guess we should have done what he said and just pulled over. Luckily for us, the next official car we encountered was manned by the San Jacinto County sheriff, who was actually very helpful. He offered us easy driving directions around the parade. We made it to the house and resumed the plan.
It wasn’t as low-key as we had hoped, but it all worked out.
The game kicked off at 6:00 pm, and we didn’t really have a chance to eat. 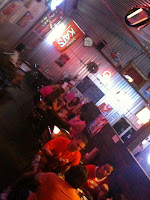 So, afterward we found a college bar, where we sat and watched more football on TV while feeling decidedly out of place. The college-age waitress took pity on us, no doubt theorizing we just might be somebody’s parents. The air quality inside the place was somewhere south of desirable, but the quesadillas were fresh and tasty.
Later, we would learn that we had stumbled into the San Jacinto County Fair and Rodeo. It’s the only game in town on the only road through town. It must be worth doing once a year.