(Huntsville, TX) - Life keeps taking me to Texas. This time, a broadcasting assignment had me spending a rainy evening in Huntsville on the sidelines of a college football game. 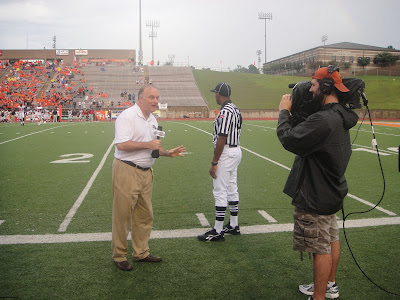 My primary functions as a sideline reporter on the Southland Conference Television Network are to host the halftime show and to do on-field interviews.
This particular set of sideline conversations had a couple of exciting components. The coach at Sam Houston State University is new this season, and this was his first game in front of his home crowd. I liked him from our first encounter. He introduced himself as “Willie,” not “Coach Fritz,” or “Willie Fritz.” It’s subtle, but it says a lot about his demeanor, I think. The opposing coach shook my hand but didn’t say his name at all. I guess he assumed I knew who he was. It’s a valid assumption, since it was my job to know, but you know what I’m saying.
I got to interview Willie twice, once just before halftime and again after his team won. He had a great night, which made my life a little easier than it otherwise might have been. 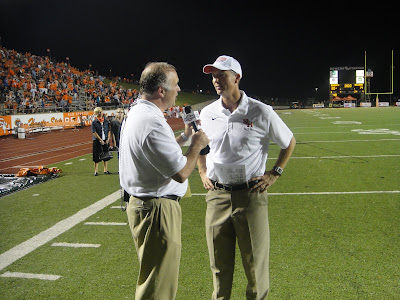 I also got to talk on camera with a man from the NFL’s Houston Texans. Sam Houston State’s football team will play against Stephen F. Austin in the Texans’ big stadium next month, so during halftime we tried to sell a few tickets. 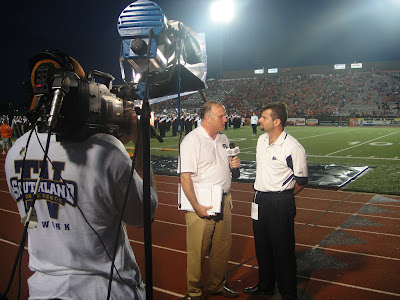 They’re touting the game as ”The Battle of the Piney Woods,” which strikes me as more descriptive than clever. I get to be on the field for that one, too; and that’s kind of exciting.
It was generally a pleasant evening, made even more so by my wife’s presence as well as an affable TV crew, but the weather was an issue. It was raining hard for much of the first half, which made looking presentable for TV a bit of a challenge. There was also an unanticipated technical issue related to the conditions. The earpiece TV people wear is known as an IFB (Interruptible Frequency Broadcast, or maybe Interruptible Feedback. Whatever. What it stands for is not that important). This is essential equipment, especially when you’re on the air live. It’s how you hear your broadcast partners, as well as the producer or director giving you instructions. It was raining so hard that water was rolling into my ears and into the IFB, literally drowning out the sound. Time and again, I had to pull the thing out of my ear and let rainwater drip out of it, just so I could hear. The good news is, I was diligent about it and as far as I know I didn’t miss a cue. 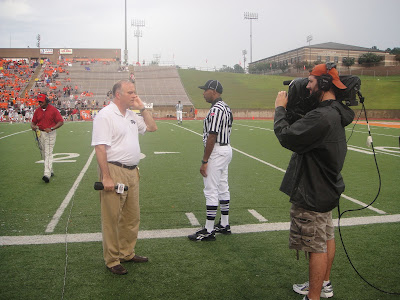 The rain stopped before the sun set and a little breeze kicked up. So, by the end of the game the field crew and I had improved from soaking to slightly damp.
This was my first trip to Sam Houston, which of course meant an opportunity to continue a Daddy D tradition. Meet Sammy! 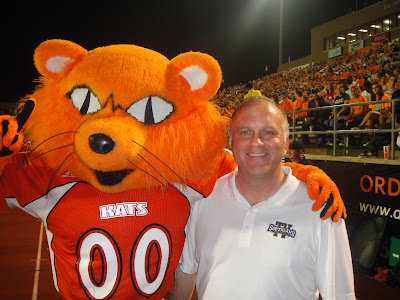 A new mascot photo was worth getting wet for.