A Dragon's Breath is Hot!

A sizzling Saturday spent on the banks of the Red River has left me roasted. There were dragon boats on the water and I was tasked with announcer duties.
Dragon boats? 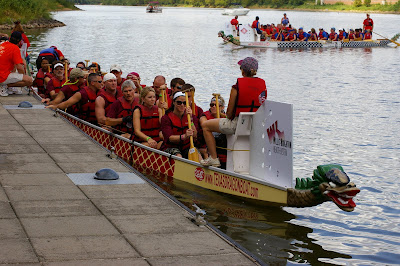 Yes, dragon boats originated in China, we are told, more than 2000 years ago. Now, racing events dot the globe. The Rotary Club of Shreveport, of which I am shockingly a member, has been organizing a riverfront festival with the races at its centerpiece. 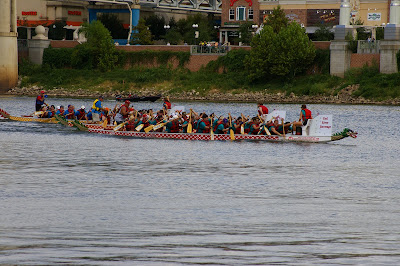 The goal is to raise money for local underperforming schools, and last year the club donated $20,000.00. We certainly hope that number gets bigger year by year.
The event has yet to capture the widespread imagination of the public. It’s somewhat esoteric, I admit. It’s colorful and fun, though. The participants, many of whom travel from significant distances, really get into the competition. 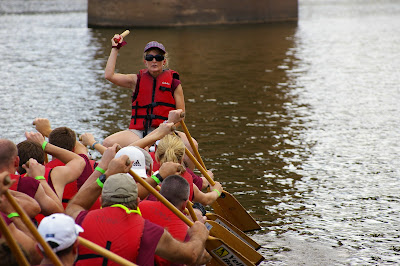 It requires organization and teamwork. Practice helps, too. But not everybody has a Chinese longboat hanging around the bayou, so they do the best with what they have.
The course on the Red River was 250 yards, a straight sprint between two bridges. 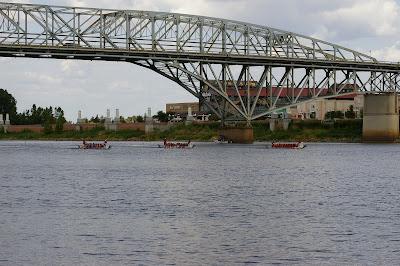 The local fire department boarded a spirited team on a boat and they paddled their way through several heats to claim the grand prize. Their goal was to cover the distance in less than a minute. They got really close, but missed it by a fraction of a second. That gives them something to strive for when the festival floats around again next fall.
The organization of this event requires a dedicated team of volunteers working across the calendar to make it work. There were a lot of stressed and sweaty people running around the river bank just making sure things ran smoothly. 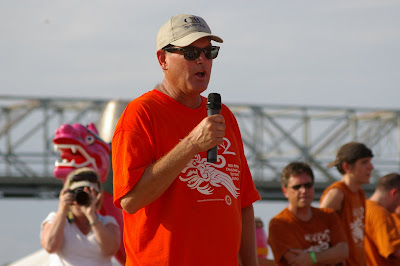 I think they did; although your announcer and his hosting partner made a fundamental error sometime during the hottest part of the afternoon. We left our microphones on as we carried on a casual conversation. The entire festival site heard what we had to say. Fortunately, we were talking about how well things were going and about how people seemed to be enjoying themselves; a happy happenstance as it turned out. 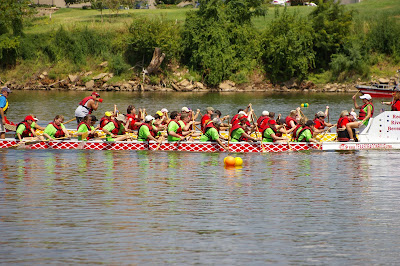 The only problem with being the event announcer is it keeps you from getting into a boat. It also keeps you away from air conditioning and an afternoon of college football, but that’s okay.

It really was worth doing. I felt like a dragon breathed fire on my legs and the back of my neck, though. Next year, I’ll crank the SPF on my sunscreen up a few notches.