I made it through a season of Arena Football as a team broadcaster. Our season was a disappointment, to say the least. The guys won three games and lost thirteen. A couple of times they were embarrassed, but in most games, they were competitive.
I have been asked several times over the last few days if I’m glad the season is finished. I am ambivalent, to tell you the truth. It will be nice to have my weekends back. I had fun, though, and most of the people I hung around with over the last eighteen weeks were enormously entertaining. I’m going to miss them.
Our beleaguered quarterback, JJ Raterink, was at or near the bottom of the league statistics in

almost every category. But, he’s a great, clean-cut kid who seems to know what he wants out of life. He’s from Colorado and played college football at Wyoming. His parents traveled to every game and his older sister came to many of them. They are a devoted, close-knit family who support one another. They’ve invited just about everybody to Boulder to visit them, and they’re so doggone nice it’s easy to be tempted to take them up on the offer.
Former LSU and New Orleans Saints tight end Nicky Savoie joined the team at mid-season, hoping to whip himself sufficiently into shape to make a run at some kind of pro football comeback. He’s Cajun through and through. Even though he was the oldest guy on the team, in many ways he was like a huge kid. He stands 6’7”, but has the spirit of a teenager. After a rare road victory, he forced me to drink beer in order to celebrate. A good-natured, profanity-laced confrontation on the team bus left me no choice but to quaff hops and barley.
I spent most of my time on the road with the coaching staff. They’re all great guys. A couple of them are local. One is a graveyard shift police supervisor who just lives and breathes football. Another is a head coach at a local high school. Still another is a former pro football player who answered the call to help his friend, head coach John Fourcade. 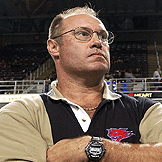 Hanging around Fourcade was a career highlight. This guy is a constant laugh riot, even when he’s not trying to be. He’s hot-headed and profane when he’s agitated. He’s an engaging raconteur when he’s relaxed. From his days as a highly-recruited high school quarterback from New Orleans through his legendary career at Ole Miss, which led to a pro career in The CFL, NFL and AFL, he has stories. A guy who starred at an SEC school and was a playoff quarterback in the NFL gets around. When his playing days are over, he’s left with a seemingly endless supply of tall tales. This guy also owns several Hooters restaurants in Louisiana. Needless to say, he enjoys a certain amount of popularity.
Before the last game of the season, the assistant coaches bet him twenty dollars apiece that he could not make it through the first quarter without using profanity. He took the bet. I said we needed to define what profanity is, because he will try to find loopholes. Immediately, he started to squirm, saying anything that described a bodily function would not count as a cuss word. You can use your imagination, but at least three four-letter words come to mind that can fairly be categorized as bodily functions. One of them is one of the worst words in the English language. He was not allowed to use that excuse.
So, profanity was defined and the bet was on. About halfway through the first quarter, something frustrating happened. The coach’s head almost spun off his neck. He looked around, reached into his pocket, pulled out some $20 bills and threw them on the ground, screaming “There’s your *&^% money!,” Then, he turned to the player who upset him and screamed “What the (bodily function) were you doing? Get your head out of your (body part).” It was quintessential Fourcade, and it’s one of the things I will miss now that the season is finished.
I don’t know if he’ll be back with the team next year, or if I’ll be asked back, for that matter. Each of us had a one-year deal. I hope it works out for both of us. I made some new friends over the last eighteen weeks, and the whole experience has been worthwhile. I hope we’re both back. All of us deserve a chance to not only have fun, but to be a part of a winning team. I think we have what it takes to accomplish that. We just need a little more time.