In the wake of the alma mater's football team getting baptized by Calvary Baptist in the Pope vs. Preacher Bowl last night, we dip into the Daddy D. archives again. This from November of 2005, a feature on Calvary's coach:

Doug Pederson never saw it coming: The hit that led to the end of his pro football career, which in turn sent him packing for an unanticipated journey to a place called Calvary, blindsided him in more ways than one.
Pederson spent thirteen seasons in the National Football League, most of them in Green Bay, backing up the most durable quarterback in league history, Brett Favre of the Packers. He came to accept his place in the Packers’ pecking order. “You can only play one quarterback at a time. You have three wide receivers or four wide receivers. You got one quarterback. I was comfortable in that role. I did everything I could every off-season, every preseason to be the back-up,” Pederson said as he kept tabs on a new team, this one decidedly different from the one he was a part of a year ago.
A number two quarterback must be prepared to enter a game on a moment’s notice. On October 3, 2004, Pederson got the call. Favre had been knocked silly. A concussion sent him to the sidelines. Pederson, leading the Green Bay offense, was stepping out of bounds at the end of an otherwise routine play when Keith Washington of the New York Giants delivered a wicked blow. Pederson had relaxed, thinking the play was finished when he “got blasted.” The result: a broken transverse process, a small bone off the vertebrae where muscles and ligaments attach to the spine. 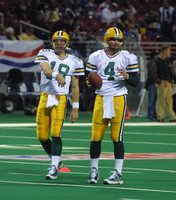 While Pederson continued to play in the game, the pain worsened. Ultimately, as he attempted to throw a pass, “my whole back felt like a ball of fire.” More than a decade after breaking into the NFL, including stops in Cleveland, Philadelphia and Miami, Pederson had played his last down of pro football.
Lambeau Field, where the Packers play, is a long way from Linwood Avenue, where the Calvary Cavaliers listen attentively and with a certain reverence to their first-year coach. Certainly, there is deference to his experience. “He knows all the coverages. He knows how to watch film, read it. He knows everything that’s going on. He can prepare you for the next game every week,” said Calvary sophomore quarterback Jake Booty. In his new environment, though, Pederson commands respect for another reason. 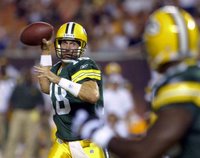 “He’s a great Christian guy,” Booty said. “He’s a great guy to have around. He’s always encouraging, always there to help you. Never puts you down, no matter what’s going on.”
The jump from flying on charter jets across the country with millionaire superstars to riding a bus across north Louisiana with high school kids was a leap of faith.
“This transition has been really easy for me,” Pederson said. “Obviously, my faith had a big part in that, too.”
Calvary Baptist Academy’s leadership actively pursued Pederson to lead its brand new football program, which is competing in the Louisiana High School Athletic Association for the first time in 2005. “I blew them off twice. About January of this year, I decided to come take a look,” Pederson recalled. “I kept telling them I was going to come back and play another year. But, my wife and I traveled over here (from their off-season home in Monroe) and just fell in love with the place.” So far, the affection is returned. The comments from the players are consistent. They admire his patience. Booty, who has had three older brothers play major college football, has seen a variety of coaching styles up close. Being tutored by an NFL veteran might be intimidating, but Booty says Pederson “never gets real mad at you, upset, yelling at you…just showing what you need to do, basics and everything.” Sophomore wide receiver Khiry Cooper puts it more succinctly, saying his coach “sets a standard for Calvary.”
Pederson speaks with passion about that standard. He believes the school has high expectations athletically, academically and spiritually. He has affirmed his faith in the church’s leadership by enrolling his sons in the academy. “I always wanted to spend time with my boys, watch them grow, coach them. This gives me that opportunity.” At this moment, it’s difficult to discern where the coach stops speaking and Dad takes over.

“I wanted my boys to be in (a faith-based) environment. Now, I say that, but I back it up and I say ‘Is a Christian school, is a private school, is it All That?’ It’s what you make it. The fact that we can openly talk about our faith here and pray with the kids and do some things maybe a public school can’t do, that was of interest to me.”
“Over the years, football has blessed me. I’ve had the opportunity to go into schools and talk about my faith and what Jesus has done for me in my life through athletics. Now, I feel like this is just another platform I’ve been given to continue that and still stay in the game of football.”
Then it becomes clear that the Dad is the coach and the coach is the Dad: “I love the aspect of game planning for Friday Nights. I love the aspect of getting out here on the practice field and watching these boys grow, watching them work out in the weight room. Again, we’re building this thing from the ground up. I get to put in my ideas and traditions, and we get to start our own history.”
The story of Calvary football is being written day by day. Pederson and his team can only look forward, for truly there is no looking back. “There are no expectations this year,” Pederson offered. It seems philosophical, but is merely matter-of-fact. “We’re starting from ground zero, and whatever happens happens. That’s really the mentality that I’ve tried to get to these boys. There are no expectations of you. There is no last year. What do we compare it to? We’re starting. Whatever we do this year, now we’ve got a benchmark to build the next year and build the next year and we keep getting better and better.”
There is no premium placed on wins and losses, at least not yet. “Winning is probably second to just doing things right, just trying to get the program off the ground,” Pederson said, trying to convince himself. But he knows something about victory. He was part of a Super Bowl championship with the Packers, and was a freshman at Northeast Louisiana when the Indians won the NCAA 1-AA national championship. A native of Washington state, Pederson did not win a championship in high school. There is a hole in his resume he would like to fill as a coach. “I’m going to try to get these boys (a championship) here. That would really round out something to be proud of and get these boys believing in that.” 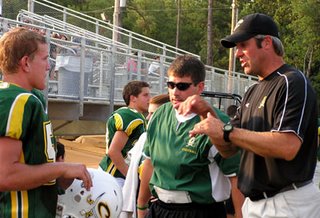 He has a philosophy that he believes will take them there: “I think if you take care of your business, do the little things you’re supposed to do, the wins and losses take care of themselves. You don’t have to preach winning to do it; you just have to teach football, the fundamentals of football. That’s how championship teams are built.”
The foundation will be laid with faith, kindness and encouragement.
“I was told that for every one negative you say, it takes five positives to reinforce a kid’s emotion and thought pattern. I’ve had coaches get in your face, scream, holler, cuss in your face and spit and everything else. Did it affect me? I understood I made the mistake. I didn’t need the coach telling me I made the mistake. Here again, at the high school level, you’re trying to mold and shape and create something where these boys want to play for you as a coach.”
Pederson is creating a culture of kindness in his football program, but that does not translate into low expectations. He sets those standards and expects them to be met by everyone around him. He will forcefully spell out his expectations, should the need arise.
“You still want to teach discipline. They still need to be disciplined, not only in school, but on the football field. They’ve got to take care of their business, and that’s something we’re trying to instill in these kids.”
Kids: A key component is this whole process. They are all teenagers, which presents its own set of challenges, some of which the first-year coach did not anticipate.
“In the NFL, all you did was football. You went to meetings, you went to practice, you went to more meetings, you went home,” he said somewhat wistfully. “Here, you’ve got to deal with school. (You’ve) got to keep your kids eligible. You’ve got to deal with a kid being sick. One kid’s out, so you’ve got to change your whole routine. You’ve got to deal with kids having doctor’s appointments during practice, dentist appointments. I’m with a young football team. I’ve got kids taking their driving tests. I’ve got to excuse kids from workouts to go take driving tests. That’s all new, but it’s something I’m adjusting to.”
As he authors Calvary’s football history, Pederson is already dreaming of a future that has its own rewards: “One day, you want them to come back to your school on homecoming or pick up the phone and call you and say ‘Hey coach, I appreciate everything you did. You really taught me how to be a man or to handle whatever situation comes down the road. That’s what makes it special to be a high school football coach.’”
Should it come to pass, no one should be blindsided by Pederson’s success.

Excellent article on an outstanding, Christian man. Doug Pederson is a geniune, kind man. My son was fortunate to be on his first Calvary's team last year. Plus, I work on the eligiblity at Calvary. Doug is a very humble man. Betty Canfield