Happy Football Season! This greeting has spread around town like a holiday salutation. The smile it brings to so many faces is reminiscent of a much more temperate time of year. For LSU fans, the comparisons between September and December are fair. There’s something special in the air, a breathless anticipation. If the expectations of the season are realistic, this can be an uplifting, even rewarding interlude; but the potential for disappointment and a bit of despondency is real, particularly if we are expecting more than can realistically be delivered.
The 2006 LSU Tigers are ranked consistently in the top ten, and in the top five in some preseason polls. This is setting LSU fans up for quite a fall. The 2005 season was reasonably satisfying. The Tigers won eleven of their thirteen games, ending with a 40-3 dismantling of Miami in the Peach Bowl. The early-season overtime loss to Tennessee in the days following the Katrina disaster can be forgiven, quite unlike the disheartening defeat by Georgia in the Southeastern Conference championship game. If you throw out the SEC title game as an aberration, last year’s performance easily justifies the lofty if somewhat precarious perch upon which Tiger fans find themselves as the season begins. 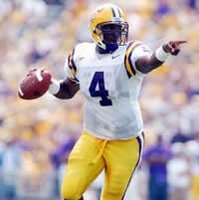 There’s one player who touches the ball on every offensive play, and JaMarcus Russell causes the faithful to glisten as they consider the possibilities he brings to the field. He has guided his six-foot-six, 250-pound frame into a remarkable half-dozen come-from behind victories. He brings experience, savvy and imposing potential to his role as Coach Les Miles’ anointed starter at quarterback. The players around him have the potential to be spectacular, but they will be only as good as the offensive trigger man allows them to be. LSU’s biggest strength may be on the defensive side of the ball, where senior free safety La Ron Landry brings NFL-caliber talent to the field. Linebacker Ali Highsmith is expected to be among the best in the nation at his position. The Tigers had arguably the best pass defense in the conference in 2005, and the bulk of the defensive backfield remains intact. The defensive line is a question mark, and Highsmith’s colleagues backing them up need some seasoning.
The schedule does not work in LSU’s favor, if you consider the fact that Auburn, another top ten caliber team, shows up on the slate in mid-September. That game is set up to provide the first barometer reading for this year’s crew. The unthinkable distractions of a life-altering natural disaster shaped the 2005 team in ways previously unimaginable. This season, there is every reason to believe LSU’s status in the college football hierarchy will be determined by football and only football, the way a bunch over overgrown young men in helmets and pads should be evaluated. If they come away from the Auburn game with a victory, the anticipation of what is to come could very well be breathless.
This will be a critical juncture for the emotional well-being of LSU fans. Dreams of another BCS national championship will dance like sugarplums in their heads. There they will be, snuggled in the downy cover of their own gridiron dreams, hoping that the clatter they hear is not a harbinger of disappointment, but instead a precursor to a gift that will illuminate their new year with the light of legitimacy. All LSU fans really want for Christmas is a universal acknowledgment that their football program is among the nation’s elite. They don’t need ribbons and bows, they need crystal; and it needs to be shaped like a football and mounted on a trophy. “Happy Football Season” is an amusing and appropriate greeting in late summer and early fall. When it can be said with sincerity in December, you know you truly will have had a happy holiday. Plus, you’ve received a gift that keeps on giving. Get the purple and gold ornaments ready.