The Countdown to Disappointment

We are a week away from the big Cowboys – Saints exhibition game at Independence Stadium, and my child-like enthusiasm for the event hasn’t been spreading.
The naysayers are out in force. Even our first-string local columnist, Teddy Allen, is taking pots shots at the game in the Sunday paper. Given his opinion, it looks as though a pre-game tailgate spread of pork roast and grits wouldn’t get him there. If the Saints have lost Teddy, they have a lot of ground to gain in Shreveport-Bossier.
Tom Benson, the Saints owner, has done a decent job of keeping his yap shut over the last several months. His unseemly and ill-timed flirtation with San Antonio in 2005 angered a lot of people around the state. Now, here in the northwest corner of Louisiana, some of us who have felt neglected or slapped around by Benson and the Saints have a chance to express our disdain by simply staying away. Many people are choosing to do that, refusing to pay the ticket price. Even more insulting, I’m predictably hearing time and again, is the parking charge. Perhaps more indicative of the prevailing mood: many people with whom I’ve discussed the game are only marginally aware of it. “When is it, again?” I’ve been asked time and again.
So, this is not a special event in the minds of many. It is, in fact, something worth barely considering. Somewhere, somebody thinks having the two nearest NFL teams meet in our little stadium is a big thing. Apparently, it’s a matter of value. They’d spend, say, twenty bucks a ticket but not a hundred. They’d pay five dollars, maybe seven, to park, but not twenty. They’d come if the thermometer registered less than 85 degrees, but it won’t.
I’ve watched parts of a handful of NFL preseason games this weekend. There are plenty of empty seats in those stadiums. Everyone understands that it’s just practice. So, I’m willing to concede that it won’t be embarrassing on a national scale if our stadium is sixty per cent full. Conversely, think how impressive it will be if the place appears packed on Monday Night Football. Wouldn’t we rather create the perception that we are a dynamic place, a place with enthusiasm for something so noteworthy?
It’s almost as if we’re reluctant to admit we’re proud to have the attention. Mega-Watt movie stars are hanging around town making big-budget films, but some of us are too arrogant or insecure to admit that this is something to be excited about. It’s fun and interesting and yes, cool, to have Sandra Bullock, Kevin Costner, John Goodman, William Hurt, and so many others here. 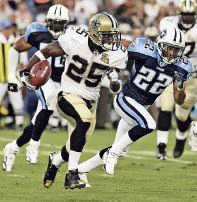 It’s kind of amazing that the Heisman Trophy winner will strap on pads in our little locker room next Monday. Terrell Owens, one of the most controversial and yet compelling figures in professional sports, will catch passes on our turf. One of the three most successful pro football franchises of all time will play a (practice) game in prime time on national television in our city. How can that not be exciting?
It’s all in how you look at it. You can focus on the fact that the big names will only play part of the game, or you can focus on the fact that they’re here. You can focus on how the attendance really doesn’t matter, or you can focus on how a good showing will potentially make a positive impression, internally and externally. You can focus on how we’re a community in stalemate and malaise, or you can do something to prove otherwise.
I’m going to the game, and I’m taking friends along. I’m excited about it. I think it’s a big thing 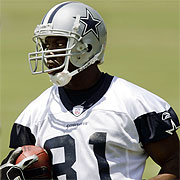 and I’m approaching it that way. I didn’t negotiate the state’s deal to subsidize the Saints’ operations, the former governor did that. I can’t change it and I choose not to protest it by staying away Monday night. I choose to participate in an activity that will make us all look good and will show that we are a city worthy of special events such as this. It has become cliché to speak of “quality of life” issues, but here is one, slapping us in the face. I guess that’s how some people see it, anyway. I choose not to be insulted, but to be enthused. See you at the game.

Darrell,
Well written. I have earmarked your blog. I am perhaps one of the biggest Saints fans in the state. It is hard for me to watch the Saints -- and LSU -- because I get so upset if they are losing. You make some very good points, to be sure. But I believe the Saints are the culprits here. They have a chance to woo some northwest Louisiana fans -- many of whom prefer the Cowboys -- and what do they do? They charge outrageous prices for parking and tickets. I just don't get it. Why does it always have to be about the money? Why couldn't they have set prices that would have allowed more lower income whites and blacks to get the thrill of attending a pro football game? I attended many Redskins games during my years in Washington and I am still a big Redskins fan as well. But what the Saints have done is to turn a lot of people away after the state and the taxpayers have been so good to them. I will still be a rabid fan, but I don't plan on paying the price to see them in person. You can use this on your blog if you like. I applaud you, nevertheless, for your enthusiasm. Maybe I am just a bit jaded at this stage in my life.
Lou