Four weeks ago, if you had told me I would be thrilled to see somebody stand up and pee, I’d have looked at you like you were crazy. The idea that I would be happy to stand around while it happened just to make sure nothing went wrong would have been incomprehensible. But here we are, celebrating milestones in the recovery of The Sick Person in my family. Since February 4th, the poor guy has been flat on his back most of the time and has suffered the necessity of a catheter until just a couple of days ago.
There's encouraging progress to report. This weekend, we loaded up the wheelchair and got him out into the real world. 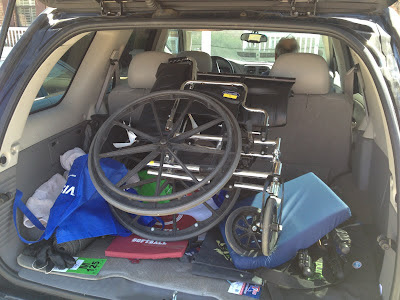 That helped his outlook, but a grand gesture of love and kindness was like a bolus of adrenaline to his confidence. The man has been divorced for more than a decade and a half. His former wife and most of her people have moved away. Saturday, one of his stepdaughters brought her family to town from Texas specifically to visit him. While the trip had been planned for a couple of weeks, we decided to surprise him. I briefly checked on him during their visit, and let me say this: I’ve known him every day of my life and I have never seen him look so happy. He was ebullient, over the moon.
It’s not an exaggeration to say their showing up has been a major turning point. His primary care provider at the nursing home said that instantly he became a new person and I agree. With the snap of a finger, he was motivated to get out of the bed and into a wheelchair. He found out he is stronger than he thought. I fear he may begin terrorizing the halls where all the other sick people are trying to get some rest.
We brought him to the house for several hours later that day and he was just a chatterbox.
Mostly, he talked about how happy he was to see the people with whom he once shared a home.

He has begun to take pride in his appearance. So, today we plopped him back into the chair and took him to Target for supplies. It was like he had gone to the state fair or something. 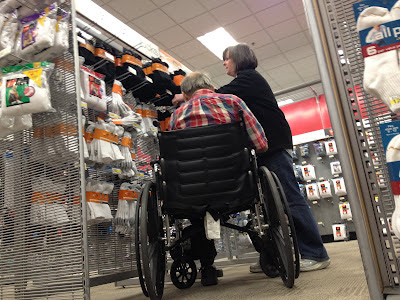 His sense of humor is coming back, too. Always kind of salty guy, he’s taken to calling the nursing home “the chicken farm” because, he says “we’re all cooped up and all we do is eat and shit.” Disgusting and a little mean, but clever. When it was time to take him back, I said “Okay, Rooster. Let’s go back to the coop.” He laughed like I was David Letterman or something, which is a heck of a lot better than lying in the bed and staring out the window. That’s pretty much all he did before his surprise visitors arrived. While he still has a long, challenging road ahead, thanks to the affirmation that his well-being matters to someone; he seems eager to face it.
I got a note from one of them moments after they left. She said “I had no idea he missed us so much. I’ll be back.” I hope with all my heart she follows through. Sometimes, love is the best medicine.