A Microphone in Hand and Turf Under My Feet 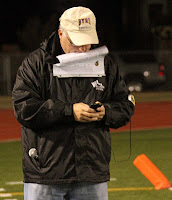 Who’s the guy in the cap on the sidelines of a football game with his head down all the time? What’s he doing? Praying? No. he’s updating Twitter!
Lately, fleeting glimpses of this mysterious figure have been seen on local TV stations as they run highlights of these games. Of course, almost no one else would notice; but if you happen to see yourself on a TV screen consistently looking crestfallen, it can be a little disconcerting.
There’s a reason to be on the sidelines, usually tied to a media outlet, so there’s an urgency to stay up to date on social media. Facebook friends and twitter followers demand it!
Having spent some time in the domain of fans this season, it’s become clear that as a guy who has a hard time sitting still anyway, I feel most comfortable on the sidelines. When you’re on the field, you must move around to have a good view of what’s going on and/ or to avoid being run over by football players. So, the freedom to roam around makes my heart glad. 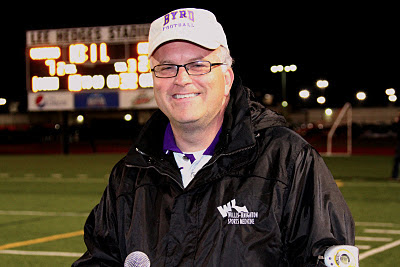 For ten weeks during this football season, a radio show locked me into a studio and it became obvious that in that setting I felt constrained. It’s better to be at the games, not to be talking about them from a distance.
I was caught a little off guard at my own glee at returning to the sidelines for high school football broadcasts. After doing spot duty during the season when my studio responsibilities didn’t conflict, now I’m all in for the playoff run. The on-field post-game interview with the coach is just at a different level from one done on the phone. There’s something about looking a guy in the eye, even on an empty football field. 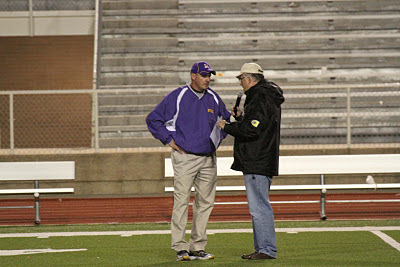 They team we’re covering is undefeated so far this season, so maybe there will be a few more Friday nights left to enjoy before we pack up the pigskin for the long, cold winter.