Echoes of Delight in the Alabama Night

Late Saturday night, while the echoes of more than 100,000 screaming voices were still ascending into the chilly Alabama night, an acquaintance from a Louisiana television station greeted me by saying, "Look, it’s big-game Darrell.” If a new nickname has been pinned upon me, I’ll wear it gratefully. Yes, it seems I have developed a knack for showing up for significant sporting events. 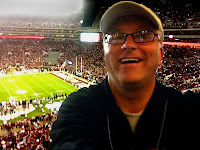 The most recent was a game between LSU and Alabama at Bryant-Denny Stadium. The Tigers were ranked #1 in the nation. The Crimson Tide was #2. It has been called the most important regular season game in Southeastern Conference history. LSU won in overtime and I got to see every play: the first three quarters and half of the fourth while essentially straddling the 50 yard line about half-way up the stadium; the final 7 minutes or so, I watched from the sidelines.
During the game, I received a text message from another long-time broadcasting buddy, who was back home in Louisiana. It said “Take a moment and thank God for allowing you the privilege of tonight.” That’s how significant this event was. I was there by the grace of God. 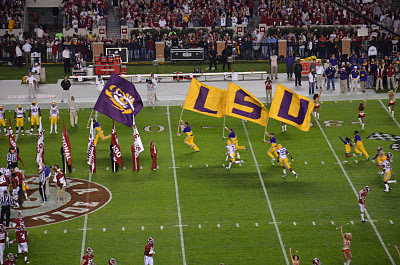 It helps to have great friends with fantastic connections. 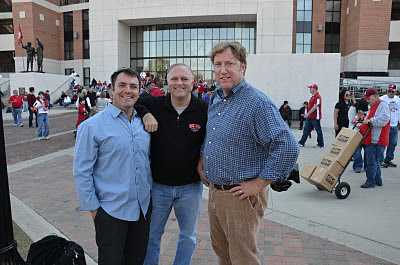 It’s also good that I have a legitimate role to play and I can rely on what has become some kind of sportscaster emeritus status. I work for my access, trying to earn my keep as a per diem videographer/ journalist/ producer/ photographer…whatever it takes.

What a day it was! It was estimated that at its peak, the crowd in and around the stadium exceeded 160 thousand.
Fans wearing purple and gold were treading a little trepidatiously as they navigated their way through a crimson sea on University Boulevard. 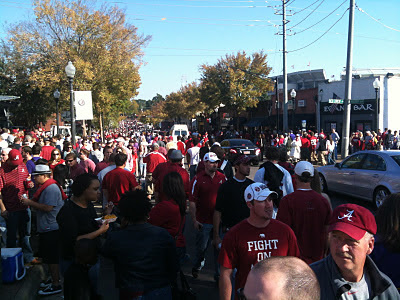 That means there were half again as many people outside as there were in, as people just wanted to be a part of something special. 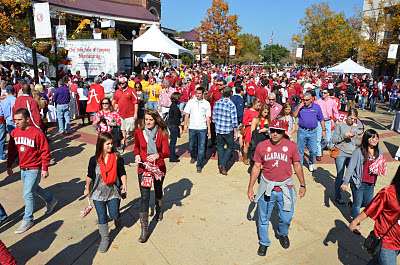 A South Louisiana chef fed thousands as he set up on campus and made the world’s biggest pot of gumbo. He sold it for five bucks a bowl, and all the money went to a relief fund to help the city of Tuscaloosa, which was devastated by a monster tornado early in the year. 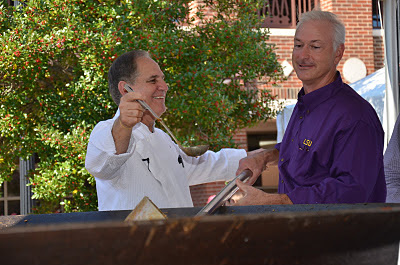 We had a great time hanging out together, as we always do; but when night fell, it was all business. We were there to cover an event. It did not disappoint. 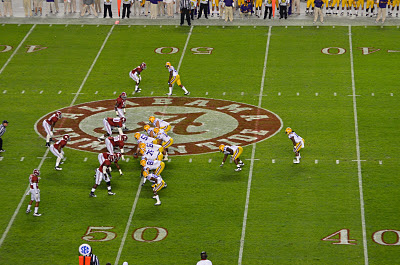 Neither team led by more than three points and no matter who you were pulling for, the outcome was in doubt until the final play, 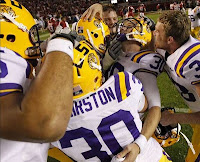 a game-winning overtime field goal. Or, as another friend watching on TV put it in yet another text message, referring to the tension he was experiencing: “It’s all I can do not to vomit continuously.”
I never felt like throwing up, but I am glad LSU won. It made the long overnight drive home a little easier to endure.
I don’t know where the next big game will be for me, but I thank God and my friends in advance for letting me tag along.