The Tail of the Discontended Kitty

While our son is off finding himself, "manning up" in California, our assignment is to deal with what he has left behind. This means a pile of boxes containing the remnants of his apartment and, more significantly, his cat.

When he first moved out on his own, he wanted a pet. I strongly advised against it, because I knew something like this would happen. He was 19 and his life would take twists and turns he couldn't foresee, like moving far away to an environment inhospitable for a house cat. But he didn't listen to me. How could he when he saw this? 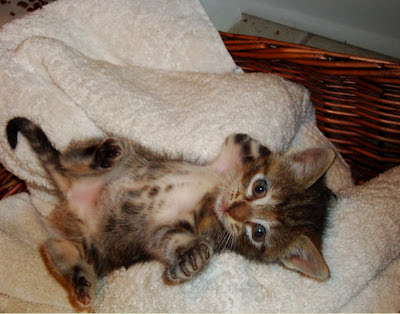 At the time, he got the tabby and his mother grabbed the calico. They're sisters and for a day or two they frolicked together at the family home.

Then, my son took his kitten into the dungeon otherwise identified as his one-bedroom apartment, where she has lived all of her life, apparently contentedly and sometimes cutely. 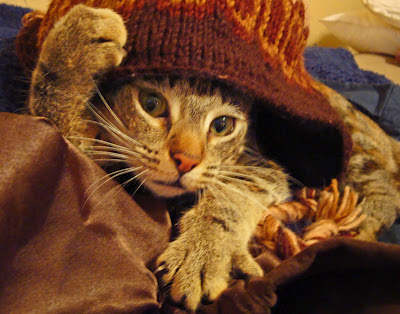 Now, with her Daddy far away for an extended period, the poor cat is apparently failing to adjust to her new (much better) surroundings. Despite the presence of her sister, for whom she has forgotten all affection, and another older cat, she's quietly keeping to herself. She's surrounded by her stuff: scratching post, blanket, litter box, food, some of our son's clothes; but she's staying in full feline freakout mode. She's staying under his bed at our house, hissing at anyone or anycat who comes near. 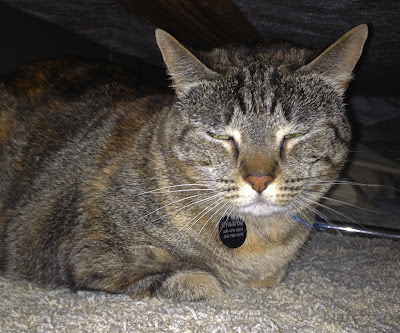 There has been the slightest progress. We did a spot check on her, as we do frequently, and found her once ON the bed instead of under it. We are bringing her treats, which she eats (but not while we're watching). We speak to her in soothing tones, say her name a lot and try to pet her. Then, she does this weird semi-meow, semi-growl thing that I've never really heard before.

Maybe she'll come around. There's a lot of fun to be had for a cat at our house. Right now, she's not really easy to love. He says she's nice. She has it inside somewhere. Just look at that cute little thing we met when she was a kitten. 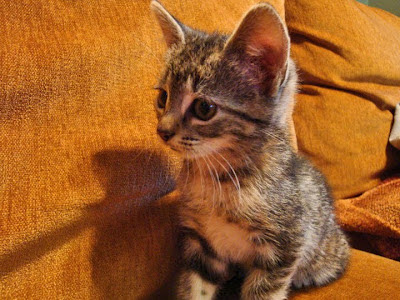 As for our son, I don't think he's worried about it. The first photos I've seen of his new life involved a hot tub and girls in two-piece bathing suits. That's a way to man up.

Oh, well, his cat's not any trouble as long as she stays under the bed. Hopefully, she can adapt to her new surroundings as fast as her owner apparently has. Sphere: Related Content