Are You Ready For Some Theology?

I'm still recovering from the longest live broadcast of my media career. I want to say "we hit the air..." but in the 21st century media world, we actually didn't. It was a live webcast, which felt exactly like an over the air broadcast, but it was internet delivered. So, we hit the net at 9:45 a.m. and signed off at 1:17 p.m.

The venue was not a stadium or ballpark, though. It was a cathedral. 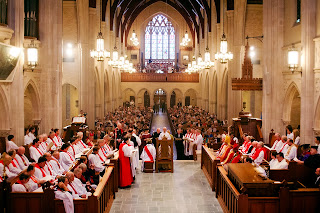 The occasion was the consecration of a new bishop for the Episcopal diocese of Western Louisiana. I was asked to host/ narrate as the service went along. And went long. The procession, er, processions...there were three of them...took a full half-hour. Then, there was a full service including an uplifting and entertaining sermon that lasted about twenty minutes, communion for a full cathedral, and the consecration itself.


Dignitaries came in from all over the state and the country. This required the host to carefully prepare. I approached it just like a ball game...doing pre-event interviews, getting to know the players(?), making extensive notes, creating boards, and spreading them out in the broadcast booth. It was made easier by the fact that I am acquainted with the new bishop and had stories to tell based on conversations with him over the last four years. I have to admit it was fun to do. But, more than that, it was an honor.


Before the webcast, I was extraordinarily nervous. This brought to mind my late father-in-law, who was an Episcopalian priest. I admitted to him one time that I rarely got butterflies before going on live radio or TV, or before speaking to a crowd. I also confessed that it surprised me a little that every time I have something to do at church, I get sweaty palms. He said "that's because you're doing God's work. If you're not nervous, then something's wrong."
Before the consecration, I actually worked up a little sweat. 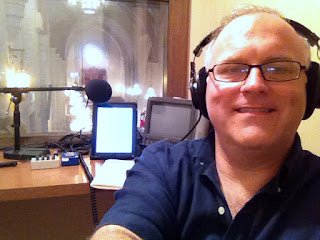 And I admit to succumbing to emotion a couple of times during especially poignant parts of the service. My job was to describe to viewers what they were seeing, presuming that some of them didn't understand the meaning of many things happening. I tried to explain things as I understood them; but given the fact we were discussing several holy mysteries, I felt inadequate.


It was about the new bishop, though, not about me. One of the things we discussed in advance was the exact moment that I should stop referring to him as the "bishop elect" and start calling him "Bishop." When it came, that was one time I had to work to hold it together. I can only imagine how he felt. 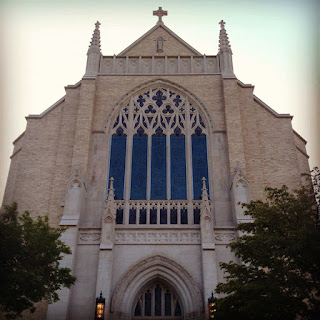