This Shouldn't Be So Hard

On behalf of anyone and everyone who might someday have the management and care of an incapacitated person thrust upon them, please heed what I say. As inconceivable as it might be to you, one day YOU may be unable to make decisions for yourself. Please, right away, go to a lawyer or LegalZoom or something and designate someone to make decisions for you: medical, legal, financial, whatever. Then tell people about it. Leave a note. Engrave a medallion. Scrawl it in Sharpie on the inside of a closet door. Do something so that people will know about it.

Our efforts to look out for the physical and financial well-being of a relative who has recently fallen ill have been thwarted by the fact that he neglected (refused) to make any such designation. 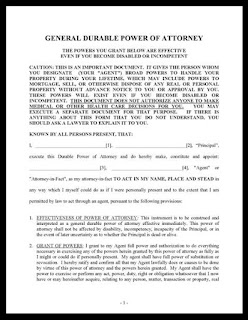 Notoriously stubborn, he consented to the creation of a document which allows someone (me) to pull the plug on his life support should the need arise. But is there permission to make changes to his health insurance status or to pay his bills while he’s out of commission? No.

So, as I’ve waded through the alphabet soup-saturated (SSA, CMS, GEHA, HIPPA, IRS, etc.) murky bureaucratic waters trying to get his business straight, I find myself being dragged down by tentacles disguised as red tape and rules.
Time and again, I’ve asked a question something like this: “Okay, so I can’t speak for him or ask questions about him. He’s unmarried and has no children. I am his only living relative. If I can’t speak for him and he can’t speak for himself, what’s supposed to happen?” Each time, the response has been some version of “Sir, I hear what you’re saying but my hands are tied.” Tentacles.
Who can untie their hands? This pursuit is dominating me.

Somehow, my cell phone number has made it into his medical records. So, I have case managers, intake coordinators, billing clerks, insurance coordinators and God knows who else from various healthcare entities calling me asking me questions to which A) I don’t have the answers and B) I am not authorized to pursue.

Meantime, the clock is ticking on his current benefits in the facility where he is presently being cared for AND I CAN’T MAKE SUBSTANTIVE PROGRESS ON FIGURING OUT WHAT THE HELL IS NEXT. If he had just created the Power of Attorney like we asked….things would be so much easier.