Taking Sides in a Frog-Dog Brawl

The TCU students in our lives have scattered to many compass points for the holidays. Our daughter and a few of her friends, for instance, seem to have successfully avoided a blizzard that has been hammering the eastern half of Colorado. From their perch at Winter Park, it’s all sunshine and powder as they shush down the slopes. 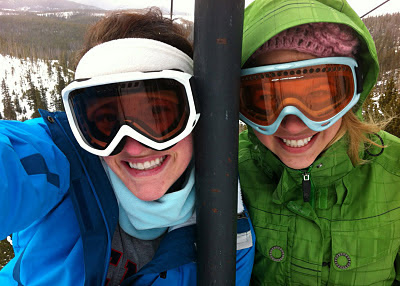 The fate of their school’s football team seems to be of no consequence. A little less than a year ago, they spent New Year’s Eve in Hollywood and January 1st at The Rose Bowl, so it’s understandable that a pre-Christmas trip to the Poinsettia Bowl for a game against Louisiana Tech would not supersede their trip to the mountains. 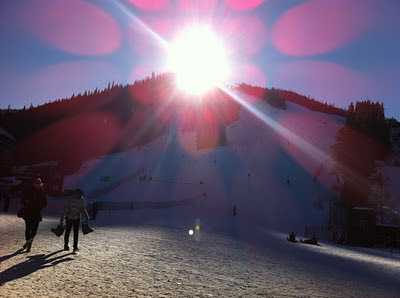 So, when the local media started poking around for TCU fans, somehow our name came up. Next thing you know, a TV reporter showed up at our door wanting to talk to Horned Frog fans who are anticipating the game. We were happy to oblige and dutifully donned our purple gear and surrounded ourselves with Frog Stuff. 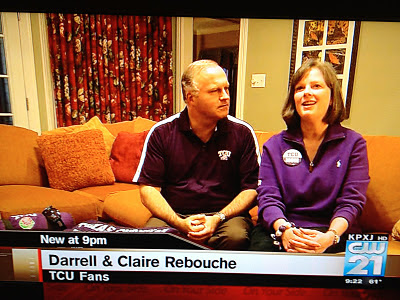 We showed up on two stations about an hour apart, looking like a couple from When Harry Met Sally. We played off one another in the tandem interview and talked about our conflicts of allegiance. 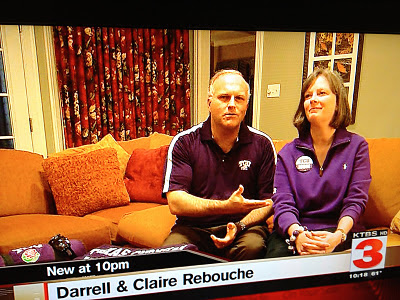 After all, as lifelong residents of northwest Louisiana, we’ve developed a great affection for Louisiana Tech. (You can watch the story here)
My wife borrowed her wisdom from a bumper sticker and correctly pointed out to the reporter that “our daughter and our money go to TCU,” so we had to make a conscious choice about which team to root for in the game.
The wife has vowed to wear purple all day. I’ll probably stay neutral. 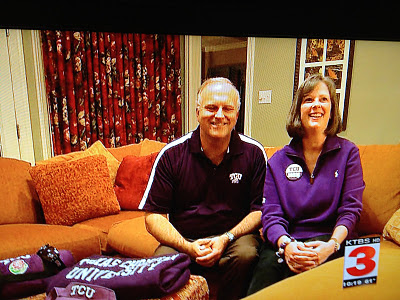 I think a bowl victory would mean more to Louisiana Tech’s program, but a loss might hurt the Frogs in the 2012 preseason rankings. So, I could go either way. We’ll watch on TV and when our daughter gets back from her ski trip, we’ll let her know how it went.