There were some anxious moments for event organizers at the Independence Bowl’s team Announcement party. Sponsors and honored guests gathered to hear from the athletic directors and coaches from the participating schools, Missouri and North Carolina. 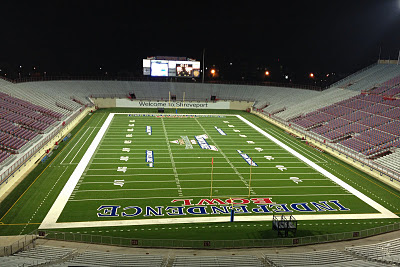 As well-wishers and bowl supporters merrily gathered in the Independence Stadium Club, the fine folks from Missouri mingled amongst them. It’s not clear how many people noticed the alarming absence of Carolina Blue. Tar Heel representatives were flying to Shreveport from Chapel Hill having spent the day hiring a new football coach.

This caused them to be significantly behind schedule. So, as the designated master of ceremonies for the event urged people to continue enjoying themselves (hopefully, they did), the bowl’s chairman was nervously checking his iPhone as he tracked online the progress of the plane carrying the A.D. and an assistant coach. The formal program was scheduled to begin at 6:45; Flightaware.com was indicating the Carolina plane would land about 6:51. Eek.

An executive decision was made to start at 7:00, no matter what.

So, the chairman and other high ranking bowl brass began to regale the assembled football fans with stories and expressions of gratitude for the sponsors and volunteers.

Then, there was a 2:00 video of Missouri game highlights, followed by remarks from the Coach and Athletic Director. In the background, there was an emergency huddle about what to do if the Carolina people were stuck in traffic or something. Before we started, the chairman asked “Are you sure about this? Once we start, we can’t really go back.” The answer was, “Sometimes you just have to have faith”: Faith in the proximity of the airport to the stadium, faith in flight tracking technology and faith in the famously light Shreveport evening interstate traffic.

Somewhere in the midst of Missouri remarks, the Carolina people strolled in as if on cue. 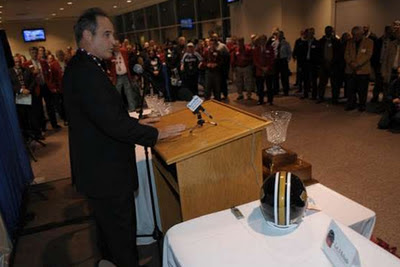 Attendees, presumably concentrating on their drinks and dinner during the prelude to all this presentation drama, didn’t seem to notice much of a disruption; especially since it turned out to be only a fifteen minute delay. The Tar Heel highlight video ran on the monitors; then the affable, if tardy, A.D. Bubba Cunningham made his way to the mic and charmed everyone.

The Independence bowl caught a break with this year’s matchup, which seems to be reasonably attractive. With everybody breathing a little easier now, maybe folks can exhale, smile and just get ready for the football game. Maybe the chairman can keep his phone in his pocket for a couple of days.

(Thanks to Douglas Collier of the Shreveport Times for the party photos.)