Singing for the Seniors 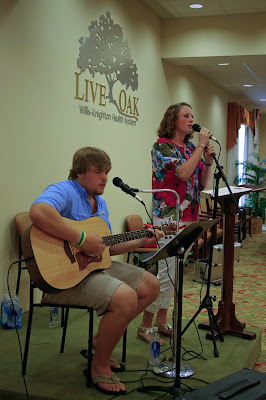 My daughter and her performance partner, who skyrocketed to notoriety at their high school with a goosebump-inducing number at their senior talent show, took on a different sort of senior audience today.

The activities director at a nearby retirement facility caught their show on YouTube and invited them to present a program during a birthday party.

This was certainly a first for both of them. They had performed in public together exactly twice, both times at school, both presentations involving exactly one song.

For this gig, they were asked to fill an hour. So, they dutifully constructed a nice little set of easy-listening songs which would presumably please the senior citizen set.

Casual observation would seem to indicate they were successful. Many of the residents were fully engaged, even though they had not heard the songs before.

Come to think of it, they may have been locked in precisely because they hadn't heard the songs, the vast majority of which were recorded and released in the last 2-3 years. Most performers offer this audience big band era songs or Sousa marches. Maybe the folks liked hearing something new for a change.

They hit 'em with some Jason Mraz, Colby Callais and Kings of Leon. They did throw a Bill Withers in there for good measure, but even that was a song recently resurrected by a contestant on American Idol.

It's safe to say the kids were nervous about this and when it was all finished, there was a sense of relief. 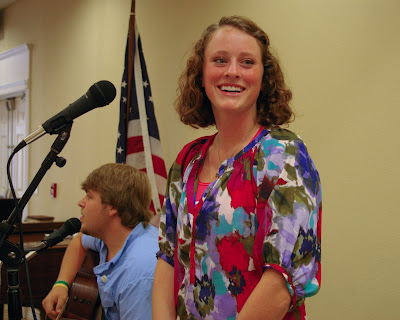 Many of the birthday party attendees greeted them after they sang and had kind things to say.

While there was actual pay involved, which would seem to indicate they are now professional performers, I'm not sure they've found a livelihood here. Overall, it was a great experience. They worked together to prepare their show. They accepted an offer to take a risk and it seems to have paid off. Beyond the paycheck, this was an experience of personal growth. To me that's a positive result of their friendship.
The duo will soon separate, however, because they're off to different colleges in a couple of months. At least they will part ways with a pocket full of memories and a song in their hearts.