I'm not God's gift to journalism, that's for sure. I was a professional broadcast journalist for most of my adult life. Certainly, my judgment on many occasions could legitimately have been called into 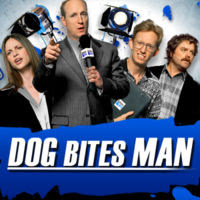 question. I did pass several journalism classes in college, though. I also attended several seminars about news assignments, ethics and that kind of thing along the way.
One of the fundamentals of journalism, which is so fundamental that it has become cliche, goes something like this: Dog bites Man: not news. Man bites Dog: news. The idea is that if it's unusual, it might be defined as news. Look back on how that piece of advice starts: Dog bites Man: Not News. Comedy Central even produced a series called "Dog Bites Man."

And yet, on Wednesday a local television station actually aired a story about a mailman getting bitten by a dog.
I would have enjoyed witnessing the editorial meeting in which the decision was made not only to put a reporter on this story, but to tease it during prime time. According to the story, the mail carrier is not seriously hurt and the dog was properly confined in its yard. The reporter who presented this piece to the viewers is usually excellent and seems to enjoy a positive reputation. I'm guessing that he was pressured by a young producer to turn nothing into something. I'm guessing he's not happy about it.
I saw this and shortly thereafter realized I was actually scratching my head. Maybe I have fleas, but I don't think so.

You know it's a slow newsday when? The "man bites dog" line was exactly my first thought when I saw this story on the news.