It's a Marshy World and We're Just Livin' in It.

Volumes could be written about the people who have come through the Shreveport media market and have been miserable during their time here. This is a place you learn to love or for which you develop a dank disdain. As someone who has spent his life living in Shreveport or Bossier City, I've often been frustrated to hear newcomers disparage my cities. After decades of watching them come and go and hearing them whine about how there's nothing to do, I finally came to grips with the fact that this is just not a place for everyone. People like Liz Swaine and Carl Pendley came to town and made it their home. Bob Griffin has been here almost 50 years, and plans to stay longer. So, Shreveport-Bossier obviously has its charms. 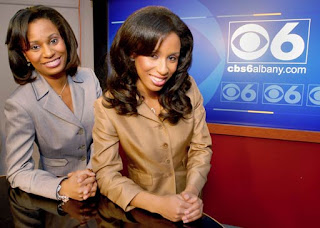 Among those young people who recently have come here and beat a hasty retreat are the Fabulous Marsh Sisters. Rene Marsh worked at KTAL for almost two years, where she struggled to fit in while limping her way through the start of a career in broadcasting. Her claim to fame was breaking the story of Woodrow Hayes, who swindled a group of nuns in Shreveport out of approximately four million dollars. Rene had it first and the national media followed.

A native New Yorker, I got the impression she never found happiness here. She just didn't seem to fit in with any community. Her younger sister Michelle interned at KTAL. They sound almost exactly alike, and certainly look like siblings. They have similar carriages. In the south, we might call them "peas in a pod." We laughingly referred to them as "The Hilton sisters." Now, they are working at the same television station (coincidentally, channel 6) in Albany, the capital of New York. They are getting attention not only because of their unusual "sister act," but because there apparently just aren't that many African-Americans on the air in upstate New York.

Rene left Shreveport before her contract at KTAL expired, searching for fulfillment. Maybe she has found it. We wish her well and hope she and her sister remember Shreveport fondly.

Newcomers disparaging your hometown is discouraging to you?